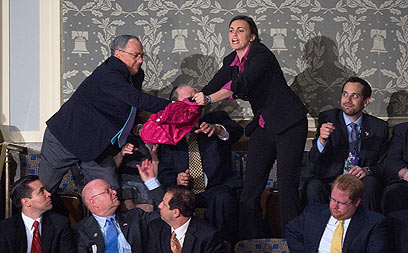 Last week we found out that CODEPINK had been added to the Anti-Defamation League's list of Top Ten Anti-Israel groups in America for the first time. We are there alongside our coalition partners at Jewish Voice for Peace (JVP) and the U.S. Campaign to End the Israeli Occupation. As JVP put it in their response to the news:

“As an organization that has a history of fomenting Islamophobia, spying on leftist and human rights groups, denying the Armenian genocide, and surveillance and infiltration against Arab American activists, the ADL has long proven that it is willing to stoop to all kinds of nefarious activities in its self-proclaimed defense of Israel.”

In their description of CODEPINK's supposed infractions the ADL cited our boycott work, mentioning the Ahava campaign as well as our participation in the Stop SodaStream coalition. Also mentioned were Medea Benjamin's criticisms of AIPAC's outsized influence on U.S. government policy and Rae Abileah's disruption of Benjamin Netanyahu's speech to Congress in 2011. We believe that our boycott work and our advocacy on behalf of human rights for all in Israel and Palestine are in line with our social justice values and so we claim this listing as a badge of honor.

We also want to thank the 5,722 people who signed our petition calling on Nordstrom to stop selling illegal settlement goods from Ahava Dead Sea Laboratories. Nordstrom refused repeated requests for a time to make an in-person delivery and asked us to mail the signatures, which we did.

In the meantime, Ed Mast of THEY REALLY SAID THAT, made a terrific video entitled “MUD IS A GRAY AREA: Talking with Nordstrom about Ahava and Occupation.” Please watch it and share. You can still send a letter to Blake Nordstrom via the Stolen Beauty website.

If you like the work we have been doing, please consider making a donation to support our campaigns. Thanks for your support, and thanks for helping to take the profit out of occupation.

Working for justice, dignity and equality for all in Israel and Palestine,

Nancy and the Stolen Beauty Team