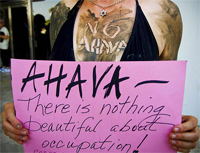 How you can support the Stolen Beauty Ahava Boycott campaign as we enter our fourth year.

In the past few weeks the international push to properly label Israel's illegal settlement goods picked up heft and speed. South Africaannounced plans to label settlement goods as such, and the Danish government quickly followed suit. A week later, a major Swiss retail chain proposed doing the same. In many of the press reports, Ahava was mentioned as the prime example of Israeli goods made in the Occupied Palestinian Territories and mislabeled as "Product of Israel."

This week the Israeli organization Who Profits released a comprehensive report on Ahava, which is made in an illegal settlement in the Occupied territories.

We were heartened when at a meeting in early May, the United Methodists voted to boycott settlement products. And we are delighted that the Presbyterian Church (USA) will also consider boycotting Ahava when they meet next month in Pittsburgh.

This month our Stolen Beauty Ahava boycott campaign celebrates its third anniversary. The official launch of our campaign was in June 2009 with a protest at the Ahava shop in the lobby of the Tel Aviv Hilton. Since then we have scored some amazing victories. In August 2009, our first big media hit was placing an article on the gossip page of The New York Post about Sex & The City starlet Kristin Davis's suspension from publicity work by Oxfam for the duration of her Ahava contract, which she later chose not to renew. The campaign has generated dozens of protests from New York to London to Capetown, and supporters have successfully lobbied a number of small retailers to stop carrying Ahava.

The list of organizations, clergy, and prominent celebrities supporting the boycott continues to grow, as more individuals and groups want to help take the profit out of Israel's occupation. Months after Ahava lost its lease at its flagship London store because of bi-weekly protests, Japanese activists successfully lobbied the local agent to stop representing Ahava.  And this past week activists held protests of Ahava sales at Sephora shops across France.

Looking back over these three years, we acknowledge that these successes were only possible because of the thousands of people who have donned pink bathrobes, carried banners, handed out fliers, made phone calls, sent letters, and donated to support the campaign. Thank you for your support, both material and moral, in working towards dignity, equality and justice for all people in Palestine and Israel.