Letter to Kevin Ryan of GILT

I'm writing to you today on behalf of an international boycott campaign against Ahava cosmetics, an Israeli enterprise that has its main production facility in an illegal settlement in the occupied West Bank. We believe there is a contradiction between your role as the Chairman of Gilt, an online retailer that sells Ahava products, and your serving as a Board member of Human Rights Watch, an organization that has taken an explicit stand against Israeli settlement profiteering.

For the past four years, Ahava has served as an international poster child for the evils of illegall settlement goods . It is on the boycott list of the United Methodist Church, The Presbyterian Church , and The United Church of Canada. In 2012 Abigail Disney renounced her share of her company's investment in Ahava because of the company’s violations of international law

We believe that Gilt should stop carrying Ahava cosmetics because an association with a company that makes its goods using pillaged resources in a factory on occupied land is unethical and ugly. Would love to speak with you about this issue. 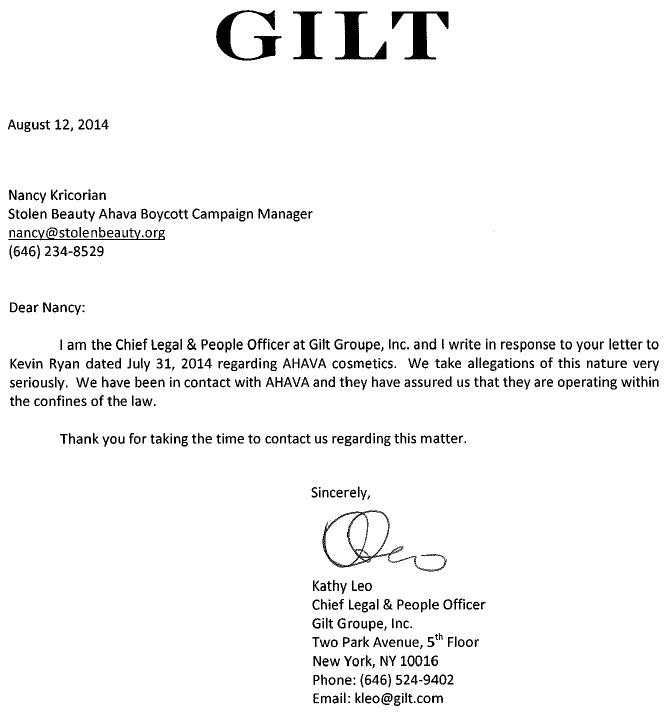 I am writing in follow up on our exchange about Ahava Dead Sea Laboratories, an Israeli company with its primary production facility in an illegal settlement in the Occupied Palestinian Territories whose products are featured on GILT’s online store. In a letter to GILT Chairman Kevin Ryan, we provided information about Ahava’s violations of international law, including the company’s fraudulent labeling, co-ownership by two illegal settlements, and its pillage of mud from the occupied shores of the Dead Sea.

In your letter dated 12 August 2014, you state, “We have been in contact with Ahava and they have assured us that they are operating within the confines of the law.” I am still astonished by this response. It is akin to saying, “We have asked the alleged thief if he had stolen the property, and he assured us that he had not.” Ahava’s violations of international law have been documented by Who Profits, an Israeli research group that focuses on occupation profiteers, by B’Tselem, an Israeli human rights organization; and by Al-Haq, a Palestinian human rights organization. Indeed, retailers around the world have decided to drop Ahava products, and investor Abigail Disney has disavowed her share in her family’s Ahava holdings, having taken the small effort to acquaint herself with Ahava’s illegal practices.

We are further perplexed by how Mr. Ryan can reconcile his position as a board member of Human Rights Watch, an organization that has taken a stand against Israeli settlements and those profiting from them, with his company’s selling goods from Ahava, which is the international poster child for the evils of settlement profiteering. This obvious contradiction is clearly a legitimate subject of public interest and discussion.

In recent weeks, Israel’s brutal assault on Gaza, its home demolitions and land confiscation in the West Bank, and its repression of Palestinian citizens of Israel have given new fuel to the boycott, divestment and sanctions movement in support of Palestinian rights. We would hope that GILT and Mr. Ryan would stand on the right side of history by choosing to drop from its roster goods from Ahava, a company that blatantly violates international law and the human rights of Palestinians.

Ms. Leo, given that your response to our earlier offer to engage with Mr. Ryan and GILT on this issue was essentially a laughable brush off, I do not expect a further reply from you or from Mr. Ryan: GILT’s willful profiting from the exploitation of illegally plundered resources is, however, worthy of your attention and correction, and we remain available to you and Mr. Ryan should you wish to learn more about the crimes from which you are profiting.

We have noticed that Ahava products are no longer listed as for sale on the Gilt site and wanted to check in with you about their removal. We are more than pleased to see that, for whatever reason, you are no longer selling Ahava's settlement goods.

Thanks for your email. I checked with our business folks and for business reasons, we determined to discontinue this line of products.