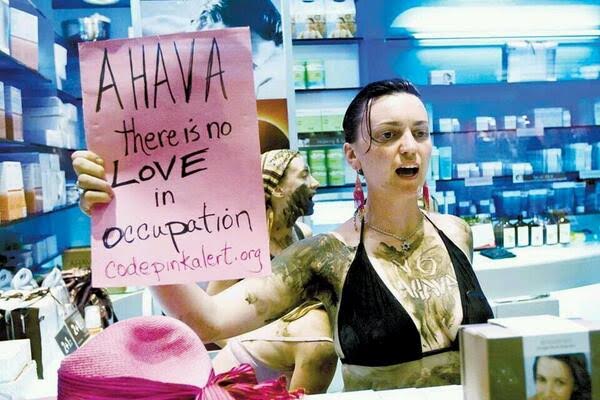 Above: Rae Abileah at the Ahava shop in the Tel Aviv Hilton, June 2009

Six years ago this month we launched our international boycott campaign against Ahava Dead Sea Laboratories with a protest inside their shop at the Tel Aviv Hilton. Today we’re writing to you to share with you some good news and our brand new Stolen Beauty Ahava boycott website. Check out the web site and read on for the good news!

Last week, after five years of our campaign and hard work by activists around the world, it was reported first in the Israeli business paper The Globes that Ahava is considering moving its factory out of the West Bank. The Jerusalem Post, Haaretz, and The Electronic Intifada picked up the story. But by far our favorite piece was this one from U.K. Cosmetics Business News.

Stolen Beauty has been targeting Ahava since 2009, because of "the illegality of its practices". Nancy Kricorian, Campaign Manager at Stolen Beauty, told Cosmetics Business: "We welcome the news that they are considering moving their manufacturing facility out of an illegal West Bank settlement. This is a clear indication of the growing power of the Boycott, Divestment and Sanctions Movement (BDS) movement, which is scoring new victories every day."

Ahava stopped selling its products in the UK late last year and has recently closed two of its seven Israeli stores.

However, Stolen Beauty was not ready to drop its boycott of Ahava products. Kricorian added: "While moving out of Mitzpe Shalem will address one of Ahava's violations of international law, there would still remain the issues of the pillage of occupied natural resources and the subsidies to the two illegal settlements that are co-owners of the enterprise." Yet, the group's reaction to the news was still overwhelmingly positive. Kricorian added: "That said, when Ahava's plant and visitors center in the occupied West Bank are definitively shuttered, I'm going to throw a party."

Even before the factory is moved out of the West Bank, let’s take a moment to savor this partial victory and the growing strength of our movement. Then, as the tenth anniversary of the Palestinian BDS call approaches next month, let’s get back to work taking the profit out of Israel’s occupation.