Valentine's Day: No LOVE in Occupation 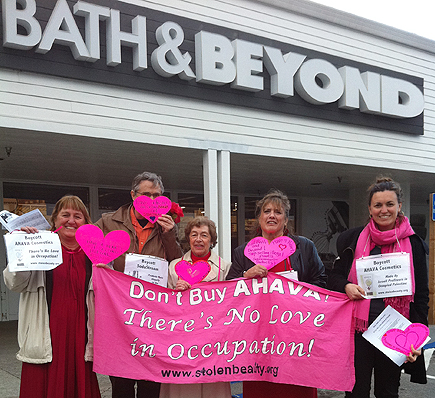 The big box retailer carries Ahava cosmetics and SodaStream products. Both Ahava andSodaStream are subject to international boycott campaigns because their production facilities are based in illegal West Bank settlements and because of other illicit practices.

1. Go to the Bed, Bath & Beyond web site and leave a customer comment. You can write your own comment, or cut and paste this one:

I notice that you sell Ahava and SodaStream. Both products are made in illegal Israeli settlements in the occupied West Bank. Ahava is made with mud pillaged from the occupied shores of the Dead Sea. Both products are subject to international boycott campaigns due to their illicit practices.This Valentine's Day, have a heart and please stand for human rights and international law. Stop selling Ahava and SodaStream. Occupation profiteering is ugly.

More sample tweets & details on the one-day twitter-a-thon can be found here.

SodaStream recently announced they would be opening a new factory in the Negev, but that they will keep open their plant in the settlement of Mishor Adumim. The new plant is a needed expansion of capacity because of increased sales, but it is also a public relations ploy allowing them to say that some of their products are made within Israel. We need to keep the pressure on so that they see the benefit of shutting down the Mishor Adumim plant.

Thanks for taking action to support human rights and international law on this Valentine's Day.